EDII is functioning as the National Resource Organisation (NRO) and is currently implementing the programme in 80 blocks across 15 States.

Major Highlights during January to March 2022:

She fought, she persisted, she succeeded… 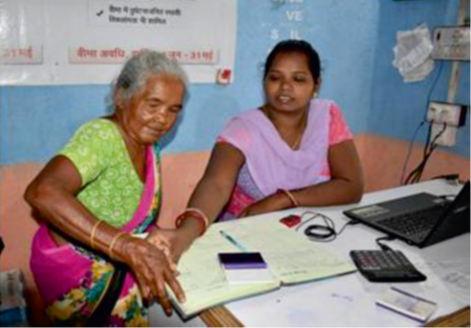 Poonam Surin has reasons to pride on her achievements. The 37-year old is the first woman from the tribal community of Gargarbahar, a minuscule village in Thetaitangar block of Simdega district in Jharkhand, to complete her graduation.

Being a graduate, Poonam wanted to start a career of her own and become financially independent. She is a part of the Gulab SHG and has been regularly saving since she joined the SHG in 2015. She acquired computers skills after her graduation and came up with the idea of starting a customer service center to provide online services to local people such as online government e-services like – Aadhaar Card, PAN Card, Money Remittances, Money Withdrawal, Account opening, Insurance and Income certificate related formalities etc.

She approached the BRC with her plan. Slightly hesitant, she spoke about the inadequacies and fears as an entrepreneur, and expressed how she looked forward to enhancing her skills. She was helped in improving her entrepreneurial skills and with the help of CRP-EP, the business plan was prepared and submitted to the BRC. The committee sanctioned a loan of Rs 1,00,000 from the SVEP CEF to help her set up a bank services point. This is the first customer service center in Thetaitangar block which is completely run by a woman. More than 100 people use this customer service point every day. She charges a nominal fee for the online services and also earns a percentage of the money transactions made via their center. Profits depend on the number of daily transactions. The average income on a given day ranges between Rs. 1200 to 1500.

During the lockdown period due to COVID 19, her business did suffer on account of reduced number of transactions. But she managed to continue with proper safety measures and by educating her customers how compliances with proper measures could keep them safe and at the same time ensure that their work continues well. Her prudent thinking and hard work helped her survive the dificult times and ensured a regular flow of work.

Poonam expresses her gratitude to EDII for standing by her at all times.