The first training commenced in the Hub – Jaibheemnagar, Karnataka on 29th September, 2021 for 40 women participants.

“The project aims to create an Off Farmers Producer Organization (OFPO) of women which will be handled by the women at the Hub and four Spokes. During the first year, EDII will hand hold the women in entrepreneurial training, technical training and trial production,” explained Dr. Raman Gujral

Senior NABARD Officials from Mumbai, Bangalore and Mysore visited the Hub recently and witnessed the progress. “They were explained the straw making process and given an overview of the progress of the participants in terms of their enhanced skill base and knowledge on entrepreneurship,” informed Ms B.R. Poornima.

Discussions for making available E-Vehicles have also been initiated with manufacturers including Cotton Greaves Limited and Design Core. 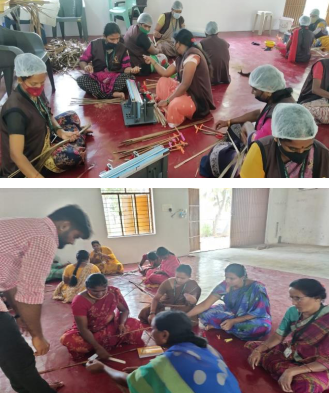 Technical Training for beneficiaries in Hub